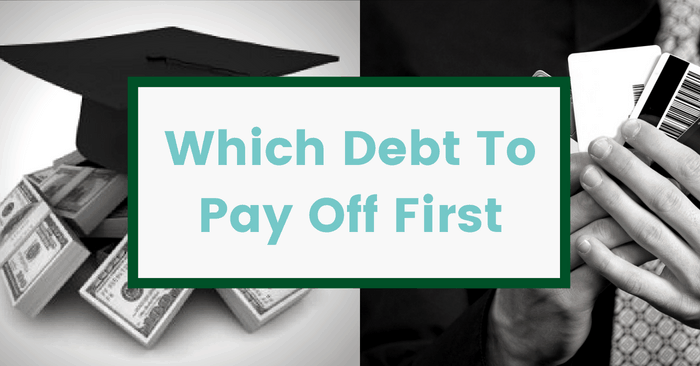 With a lot of different loans, it’s common to wonder which loan should you pay off first?

Which leaves one to wonder, which debt should you get rid of first?

In common cents fashion, I’ll break down this important question into 3 easy steps.

When I was trying to undo my debt mess, I figured out how to pay the LEAST amount of money in the end. This debt payoff method is “The Logical Way” because if you follow this method, you’ll repay the least–and save the most—money in the end.

First, figure out all the loans you have and write them down in a notebook or spreadsheet like Excel or Google Sheets.

Having a long list of debt that you owe can be overwhelming. Sometimes we look at our debt, get overwhelmed, and just throw our hands in the air because we just don’t understand what to do next.

So in true Common Cents Club fashion, we’ll break it down together so it’s easier to understand. That way you can confidently create your own get-out-of-debt-plan that will get you to your end goal.

Step 2. When Will You Be Charged Interest?

When you’re gathering information about your debt and trying to figure out which one to repay first, you’ll want to learn a couple of things for each debt. Both are related to interest because the amount you borrowed is the same to repay no matter what. It’s the INTEREST that determines how much EXTRA you will need to repay. So when we’re trying to pay off the least amount as possible, we need to learn more about each loan’s interest.

Interest is the amount of money you have to pay the lender in exchange for borrowing money. Interest is calculated as a percentage of the unpaid principal amount (loan amount) borrowed. (Here is a lot more information about interest rates from the Federal Student Aid site.)

Next to the corresponding loan in your notebook or spreadsheet, write down whether each debt is being charged interest right now or if interest will start accruing at a later date.

Many student loans are either subsidized or unsubsidized. Here’s the difference:

If you have unsubsidized loans and allow the interest to capitalize, this will greatly increase the amount you have to repay. Therefore, you want to pay UNSUBSIDIZED loans before subsidized.

Another way of saying this is you want to pay off debt that is charging you interest today before a debt that will charge you interest in six months.

From this example, I would be most interested in paying off Student Loan 3, Credit Card 1, and Car Loan because those loans have interest charges adding on to my total right now. Each day that I let this loan go unpaid, the amount I owe is getting bigger and bigger.

But do I try to pay off all 3 of those at once?

No. We are going to tackle ONE at a time so you can focus all your energy on attacking ONE goal/debt.

Step 3. What Are Your Loan Interest Rates?

The final step you need to take is to figure out what your interest rate is for each loan. This will be a percentage. Write this % next to each loan.

For example, Perkins student loans are 5% while Federal student loans vary depending on when they were borrowed. Typically, they are in the 3-7% range.

Credit cards, on the other hand, often have a much higher interest rate. This is the APR and it is likely between 14-24% interest.

Student loans might not be the wisest debt for you to pay off first.

I focused on wiping out my student loans fast because I did not have any other debt. However, if I had an unpaid balance on a credit card with 22% interest that I was being charged every day, I would have paid that off first. Why?

Because like I said before, interest is the game-changer. In order to repay the least amount possible, you have to figure out how to minimize the amount of interest fees you repay. The slower you pay your debt or if you choose to repay one with lower interest first, the more you’ll repay total because you’re paying more in interest.

So the last step is to write down the interest rate next to each of your loans in your notebook or spreadsheet.

The ONE loan you’ll want to attack first is the loan with the HIGHEST INTEREST RATE for which you are being charged interest now.

If you’re fresh out of college and all your loans are in a grace period, then you’ll simply find the loan with the highest interest rate and begin knocking down that principal as fast as you can before you start being charged interest. Since interest is a percentage of your loan balance, if you’re able to decrease your balance then you’ll be charged less interest (and save more money).

So which loan would I repay first in our example?

Credit Card 1. Mathematically, you will save the most money if you pay off your Credit Card 1 with the 22% interest first.

What About Your Other Loans?

When your other loan bills are due, you’ll pay the minimum amount due only. Put every penny you can toward that Credit Card 1 (or whichever loan is the highest interest and being charged interest now). Little by little, with one intentional spending decision at a time, you’ll kiss that debt goodbye.

Of course, in the meantime, keep your spending under control so you’re not just adding to your debt pile somewhere else.

Once that first loan is paid off, you can take all the money you were paying for the minimum due + anything extra and start applying it to your loan with the second highest interest rate. If you’ve ever heard of the debt avalanche method, that’s basically what we just did. I like to refer to it as The Logcial Way because mathematically it usually works out to save you the most money on interest fees.

And if you’re like me, you’d like to spend your hard-earned money on something other than interest fees.

How Can You Pay Off Debt Faster?

The faster you can pay off your debt, the more money you’ll save for things other than interest. So most of us wonder, how can I pay off my debt faster? The biggest factor in my experience was consistently paying more than the minimum amount due.

If you drift along only paying the minimum payments, you’ll be paying off your debt a LONG time because, until the very end, most of your payment each month is going toward those interest fees. Very little money is actually going toward lowering the principal loan amount that you originally borrowed. In fact, sometimes the minimum amount due isn’t even enough to cover the interest fees. You know what happens then? Even though you’re paying the minimum payment, your debt is GROWING each month. After I consolidated, this was actually what happened to me and it still makes me cringe just thinking about it.

So here are the proven tactics that will help you find more money to pay off your target loan:

When To Consult The Student Loan Planner

If your debt situation is straight forward, follow the advice above, keep you head down, and chip away at your debt until it’s gone.

But if your loan situation is more complicated or you have questions about Public Student Loan Forgiveness or refinancing, you should consult a professional to ensure you don’t waste thousands of dollars.

For anything student loan related, I highly recommend the Student Loan Planner team.

Schedule a 1-hour call below to get all your questions answered and figure out the right pay off plan for your debt.

In truth, paying off my student loans in less than 3 years (instead of the 20 years it would have taken me if I stuck to the minimum payments) has been a game-changer in my life.

Without a bunch of debt payments, I was able to leave my job to stay home full-time with my kids. It’s a financial decision I’m grateful I made every single day.

I don’t know what opportunities will open up for you after you pay off your debt, but I know you will not regret it. Take it one day at a time, one debt at a time.

Go ahead and send me a message if you have any questions. I’m happy to help ease the debt overwhelm and make money simple. After all, The Common Cents Club is here to help you intentionally design the life you love.

Did this help you figure out which loan you should pay off first? Let me know in the comments.

More Posts about Paying Off Debt Worth Reading

How To Make A Monthly Budget Val Breit empowers women to create a life they love with simple money hacks and productivity tips. Once buried in debt, stuck in a stressful 9-to-5 job, she hated that money stood in the way of her dream to be a stay-at-home mom. After getting intentional with how she spent her money and time, Val and her husband paid off $60,000 in debt. Now she is blessed to be a work-from-home mom, earning a full-time income online, doing work she loves.

Christmas season is coming, but that doesn't mean you have to take or come home from the gift exchange with a bunch of useless presents. Instead, check out these useful white elephant gift ideas that...